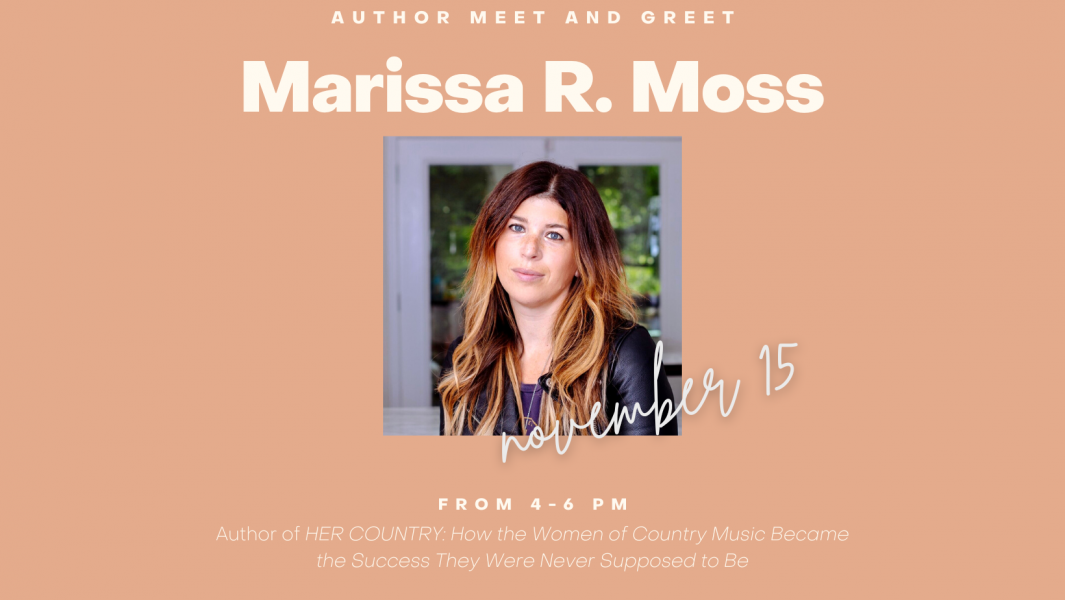 Come chat with Marissa R. Moss and get a signed copy of Her Country on November 15, 2022 from 4-6 pm at Union Ave Books.

From award-winning journalist Marissa R. Moss on May 10 via Henry Holt:

HER COUNTRY: How the Women of Country Music Became the Success They Were Never Supposed to Be

Praise for HER COUNTRY:

“Moss illustrates how these artists have carved out spaces for women, including women of color and LGBTQIA+ people, who are even less represented in the country music field. Moss’s clear and accessible writing is a delight, deftly capturing the lyricism of the genre…A must for anyone interested in country music and how the genre reflects on the United States as a whole.”
—Library Journal, *starred review*

“Marissa Moss delivers a master class on the startling inequities in country music, introducing us to the modern-day pioneers, the rebels, the risk takers, the marginalized and the misfits. This is a story of the women who defied the odds and refused to kick the ladder. Her Country illuminates the path to those artists left behind, and reminds us why we all need our country heroes to look like us.”
—Brandi Carlile, Grammy-winning artist and New York Times bestselling author of Broken Horses

“Moss’s stunningly crafted debut book…interlocks her subjects’ stories for a captivating structure, jumping between them to effectively create a cohesive narrative of feminist uprising in ‘the good ol’ boys club.’ This must read for music fans displays Moss’s extensive knowledge of Nashville’s Music Row scene…and she speaks of the genre’s ebbs and flows with an authoritative, assertive voice…Her Country speaks (sings, really) volumes about the rise of female artists in country music, and how far they still have to climb.”
—Booklist, *starred review*

“Part coming-of-age tale, part hard-hitting documentary of country music’s antagonistic history with women artists, this story is a page-turner even if you know how it turns out…The author’s reporting and storytelling shine as brightly as her subjects.”
—Kirkus Reviews, *starred review*

“Music journalist Moss debuts with an exuberant deep-dive into the careers of three country music stars who ‘opened up a window to a musical world where women are in charge.’ Offering a spirited cultural history of country music over the last 25 years, Moss traces how it…[became] a rigged system hell-bent on silencing its women…This is the unapologetic celebration fans have been waiting for.”
—Publishers Weekly

“I can’t think of a better person to be leading this much needed conversation than Marissa R. Moss. I'm thankful for how Her Country celebrates the power of women, our artistry, vision and perseverance in this industry.”
—LeAnn Rimes

“Country music has always been creative, full of strong folks, and is way more diverse than the often-portrayed stereotype. Marissa R. Moss’s Her Country is an excellent highlight of the incredible women who have paved the way for this genre as well as the women currently pushing it forward.”
—Orville Peck

“Her Country shines a light in the dark corners we don’t talk about; it’s equal parts unbelievable and completely believable. These realities are used brilliantly in this book as a tool to illustrate how women are breaking the mold, changing the rules, blurring the lines of genre, and how strong, resilient, inventive, and inclusive these women are.”
—Holly Laessig and Jess Wolfe of Lucius

“Her Country is a fascinating look at the weird isolationism of contemporary country.”
—Literary Hub

“[A] timely treatise on the infuriating gender politics of country music.”
—Holler

Born and raised in New York City, Marissa R. Moss is a freelance journalist currently residing in East Nashville, Tennessee. She contributes frequently to Rolling Stone, American Songwriter, Billboard, NPR and the Nashville Scene and has had bylines in FADER, NYLON, Pitchfork, Entertainment Weekly, The Guardian, Politico, Teen Vogue and more. The 2018 recipient of the Rolling Stone Chet Flippo Award for Excellence in Country Music Journalism, Moss has written over fifteen cover stories on artists including Eric Church, Miranda Lambert, John Prine, Margo Price, Guy Clark and Noel Gallagher. Her breakthrough story on the culture of sexual harassment in the world of country radio, Inside Country Radio's Dark, Secret History of Sexual Harassment and Misconduct, for Rolling Stone Country, is widely regarded as a touchstone in Nashville's #TimesUp reckoning.

She is currently at work on her first book, HER COUNTRY: How the Women of Country Music Become the Success Story They Were Never Supposed to Be, to be published by Henry Holt & Company on May 20, 2022.

Marissa has appeared as a guest on The TODAY Show, CBS, Entertainment Tonight, WPLN, the Pop Literacy Podcast and more. She has also been a featured panelist and moderator. She was awarded as Best Music Reporter by the Nashville Scene’s 2019 Best of Nashville.

She has also served a summer as a contributing editor for Hamptons magazine, and is the founder and Editor in Chief of Lockeland Springsteen, a Nashville-based music blog. She has a background in political communications, and worked for a variety of progressive causes in New York and Los Angeles, including Maria Shriver's Women's Conference, the American Foundation for Equal Rights and the Special Olympics World Games. As a bio and copy writer, she has crafted work for influencers, leaders and artists from Shriver, to President Barack Obama, to Grammy-winning musicians and New York City landmark Carnegie Hall.

Marissa was educated at New York University's Gallatin School of the Arts.

She is represented by Susan Canavan at Waxman Literary.

Her Country: How the Women of Country Music Became the Success They Were Never Supposed to Be (Hardcover)